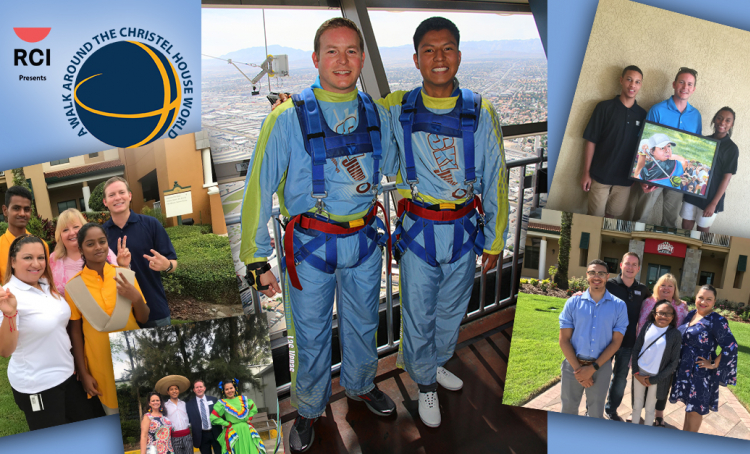 Timeshare industry veteran Michael Hall has walked with Christel House for over a decade, even if he’s only been logging miles on his Apple watch for the past month as part of the Virtual Walk Around the Christel House World.

Michael started his career at Silverleaf Resorts as a college student in 1994. He rose through the ranks at Silverleaf and joined Holiday Inn Club Vacations, giving him the opportunity to champion Christel House across two different companies. We always say Christel House International is more than a typical education, and Michael has certainly had more than a typical corporate fundraising experience.

Christel House means lifetime memories and global friendships to Michael. He began his relationship with us while serving as the Corporate Social Responsibility leader for Silverleaf. He co-hosted the first joint-venture golf tournament  between two timeshare companies to benefit Christel House and later served as the emcee for Holiday Inn Club Vacations’ golf tournament in Orlando. Each summer at Silverleaf, he led multiple initiatives including golf tournaments, races, and employee activities like Jeans Day. Over the years, Michael has helped to raise over $200,000 for Christel House.

Michael’s most life-changing experiences are his multiple visits to Christel House students across the world,where he witnessed firsthand the school’s positive impact. Michael met Christel House students and alumni in Orlando, where he served as the Student Ambassador during golf tournaments each year. He even got to take the students to Universal Studios. But it was at Christel House Mexico that he first encountered one student who made a big difference—Jesus Morales.

Michael met Jesus in 2015 at Christel House Mexico, and immediately gravitated to him because Jesus is close in age to Michael’s son. Jesus attended Christel House Mexico through the 9th grade—all that was offered at the time—before continuing his education in the local public school system. Michael said, “I was genuinely impacted when considering our son’s high school experience compared to the challenges Jesus faced and overcame.”

Jesus graduated from Facultad de Ciencias and now works as an Innovation Developer for Nativo. He currently works developing voice apps that utilize technologies like Alexa Skills, Google Actions, and Chatbox. Jesus has not only shared his technical skills with Michael, but also his experience as an artist. Jesus is an avid photographer, as well as a folklorico dancer and performer.

Michael and Jesus bonded over many trips. In 2018 at the American Resort Development Association (ARDA) World Convention in Las Vegas, Jesus and Michael made a lifelong memory together as they skydived 108 stories from the top of the Stratosphere tower!

As a long-time Christel House supporter, Michael understands the unique challenges the pandemic created this year. “The pandemic disproportionately impacted under-resourced communities while at the same time created challenges with traditional in-person fundraising,” Michael says. He encourages his friends, colleagues and family to join his Virtual Walk team either as walkers or donors because, as he says, “Now more than ever is the time to support events like this!”

Michael may have the unique distinction of being the only Christel House donor who jumped off a building with a student, but he’s excited to partake in other (less terrifying) physical activity, and bring his friends and family along. Michael’s team for the Virtual Walk is called the Hall of Fame, and they have a global reach. He says, “Different countries? No problem! ¡No hay problema! Samasy? chaina!” Michael’s team includes Jesus, as well as other Christel House alum. He’s also reached out to friends in the hospitality industry, and a friend from Nepal joined the team. Closer to home, Michael’s mother is also walking with Christel House. She may be turning 70 next month, but she’s already logged 200 miles for Christel House. In the international spirit of Christel House, Michael’s team is getting fit, raising funds, and having fun across three countries!