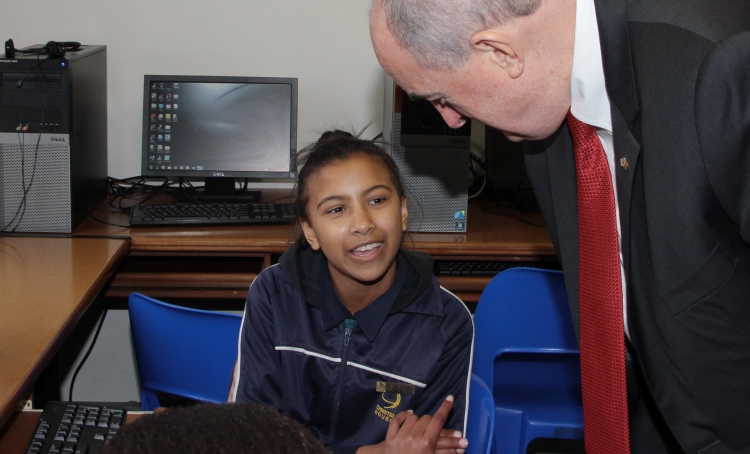 Unfortunately, the IU delegation brought with it to Cape Town a bit of bad weather, including cloudy skies, rain and brisk temperatures in the low 50s. (Of course, I’m guessing that heat-stricken Hoosiers would happily take those temperatures right now!)

That said, any weather-related blues that delegation members might’ve been feeling were quickly washed away this morning, not by the rain, but by the smiles on the faces of the children of Christel House South Africa.

For those who may not know it, Christel House was founded by Indianapolis philanthropist Christel DeHaan to help children around the world overcome poverty and realize their hopes and dreams. Here in South Africa, Christel House (which also has centers in India, Mexico, the U.S. and Venezuela) is transforming lives by providing more than 700 K-through-12th-grade children from some of Cape Town’s most impoverished communities with a quality education, as well as proper nutrition, health care and a safe, nurturing environment.

Indeed, the numbers reflect the remarkable success of Christel House South Africa. They include a 100 percent graduation rate over the last four years, a 99 percent retention rate and a 98 percent attendance rate. Christel House achieved these results while enrolling its entire student body from severely disadvantaged communities, transporting those students to and from school, feeding them several meals each day and providing support to children and their families facing a wide range of socio-economic challenges, including neglect, domestic violence, physical and sexual abuse, and gang violence, to name just a few.

Impressive as those statistics are, they are no substitute for seeing these amazing students, all fully uniformed and full of energy, in their learning environment. Following an instructive and insightful meeting with the school’s leadership, IU President Michael A. McRobbie and first lady Laurie Burns McRobbie were escorted to the front of a large assembly hall, where the entire Christel House student body, teachers and staff had gathered to welcome their Hoosier guests. Once seated, they were treated to a rousing performance by the school band, several sing-alongs and a spirited step-show. In the middle of these performances, a teenage girl confidently strode up to the stage to introduce President McRobbie and invite him to say a few words. Given a microphone, McRobbie told the attentive students about the importance of education, how inspired he was by their accomplishments and how he hoped that, one day, they might even continue their studies at IU.

After the assembly gathering, McRobbie and members of the delegation were given a walking tour of the school’s impressive facilities, including a fully stocked library where a trio of young boys flipped through a book about soccer and a Dell-furnished computer lab where McRobbie enjoyed putting on his IT hat and chatting with several young children about email, spreadsheets and word processing. From there, it was off to Cape Town’s oldest township and one of the communities served by Christel House, Langa. Established in 1923, Langa is one of the many areas in South Africa where blacks were forced to live before the apartheid era. The location of much resistance to the national ruling system of racial segregation that dominated South African society for nearly five decades, it has had a long, sometimes tortured history—a history that was eloquently recounted by our tour guide, a young Langa resident and former Christel House student named Oowa.

Members of the IU delegation receive a tour of the Langa township from Oowa, right, a community resident and former Christel House student.

Oowa, whose desire to be a professional tour guide was inspired by his time at Christel House, was candid about the many challenges facing Langa, including crime, poverty, unemployment and severely constrained living accommodations (he, himself, shared an approximately 10-foot-by-10 foot bedroom with three other families). At the same time, he spoke proudly of the positive changes he felt were taking place in his community, while challenging his own generation to learn more about those who sacrificed before it in the struggle against apartheid.

Christel House provided a most interesting model of education and inspiring lead-in to the next stop on the delegation’s journey through South Africa: theUniversity of Cape Town, Africa’s top-ranked university and the oldest university in South Africa, founded in 1829 as the South African College.

Enrollment at UCT continues to grow—by a third each decade since 1950. Today, the university has over 25,000 students, half of whom are black, and it now has over 110,000 alumni around the world.

Despite its strengths and successes, UCT has come to a realization, according to Deputy Vice Chancellor of Internationalization Thandabantu Nhlapo, that the university can no longer separate its strong academic and research enterprise with a need to produce graduates who are internationally competitive and committed to engaged citizenship and social justice.

Members of the IU delegation pose for a picture with the leadership of the University of Cape Town.

To this end, Nhlapo and his UCT colleagues were happy to hear President McRobbie share IU’s mission of increased internationalization and signal the university’s willingness to explore the possibility of student exchanges and faculty research collaboration, especially in subject areas in which both universities have strengths.

Prior to the meeting, the IU delegation sat down for coffee with two IU students, Luke Vroom and Lauren Miller, studying at UCT this semester. Both described how enjoyable their experience at UCT has been and said they would encourage more students to consider coming to Cape Town, where they were struck by the amazing diversity, history and beauty of the natural surroundings, to study.

UCT Deputy Vice Chancellor Sandra Klopper, who is also a professor of African art, suggested there may be potential for collaboration in the arts, law, music and the natural sciences, among other areas, adding with a laugh, “You know, I think more than half of my colleagues in African art received their training at IU!” Klopper’s comments came right after Harold Kincaid, a professor from the UCT School of Economics, introduced himself to the delegation by telling the group that he possessed a total of three IU degrees.

While no specifics were agreed upon just yet, both sides agreed that, as a next step, they would explore a number of specific areas for potential collaboration and cooperation. And it was clear that leaders of both schools were on their way to more productive discussions down a path toward more opportunities for future generations of students, both in the U.S. and here in South Africa, including, just maybe, someone like Oowa or another of the amazing kids at Christel House.


Link to IU Blog: http://global.iu.edu/blog/africa/2013/08/30/transforming-lives-in-cape-town/
Learn More
About Our Programs